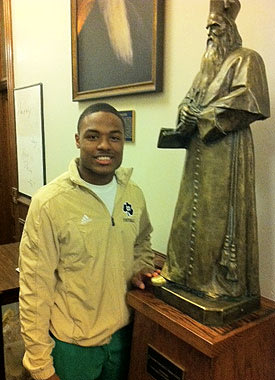 In many ways Notre Dame remains a major-college athletic anomaly. The world's most famous Catholic university aspires to win like a football factory while educating like an elite institution, and it largely succeeds.

KeiVarae Russell (right) keeps with tradition by touching the foot of Father Sorin, Notre Dame's founder.The school ranks No. 1 in the NCAA's most recent Graduation Success Rate. It is the smallest (in enrollment) and most academically prestigious (in national rankings) school to play for a championship in the BCS era (1998-present). It also is the only religiously affiliated school in that time to compete in the title game.

After decades of declining football returns, this season is the return to glory. And it's been accomplished with players who are still part of the fabric of everyday campus life.